In last week's post, I introduced Rust FFI and bindgen, a tool that supports the integration of C code in Rust. I also worked through an example of integrating API from the STM32F401RE device HAL C libraries code generated by ST-Microelectronics tools. Additionally, it was mentioned in last week's post that Rust FFI supports integrating code in the other direction. Meaning that Rust code can be integrated into other languages like C. Also, like bindgen, there is a tool called cbindgen that can be helpful throughout the process. 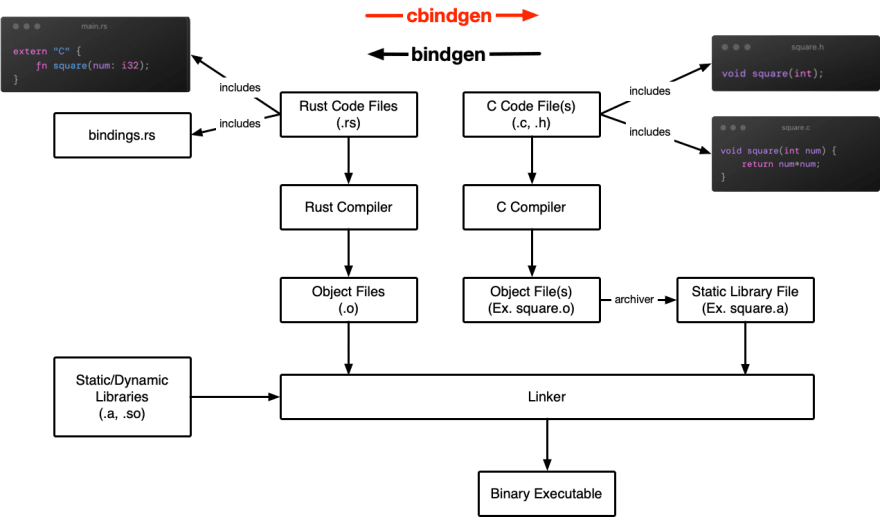 In this week's post, I'm going to do something somewhat similar to last week, only integrating Rust code in C using cbindgen instead. At first, I actually was planning to import API from the Rust stm32f4xx-hal into C to create a blinky program using the imported stm32f4xx-hal functions. However, I quickly came to realize that it's not possible for the most part. As it turns out, integrating Rust into C in embedded might prove to be a sticky affair the higher the abstraction level is in Rust. Because apparently, it’s hard for an unsafe language to understand good code (sorry, I just had to 😅). The issue is that a lot of the existing HALs rely on types not supported by cbindgen (or C for that matter) take for example trait objects commonly used in embedded HALs. Additionally, many of the HAL struct types' layouts are not compatible with C in the way they're arranged in memory (unless they're using the #[repr(C)] attribute). Something that the Rust compiler would warn about. To get around this, I had to resort to low-level implementations at the register level i.e. the PAC. This ultimately might defy the purpose of what one is trying to achieve.

📝 Note: For a full list of the supported types one can refer to the cbindgen documentation.

Before moving on, one thing to note is that compared to bindgen , I probably didn't find as many resources online for cbindgen and the process of going to Rust from C in general. Nevertheless, I came across this awesome video by Katharina Fey from 2018 that is extremely informative and a must watch.

If you find this post useful, and to keep up to date with similar posts, here's the list of channels you can follow/subscribe to:

In this post, the reference hardware used is the Nucleo-F401RE board. One can use a different STM32 hardware but needs to alternate the parameters to fit the different device/board.

📝 Note: The code and project folders referenced in this post are available on the apollolabsdev Nucleo-F401RE git repo.

cbindgen can be used as an application (for command line generation) or included as a build dependency (automated as part of build). The cbindgen application be installed using this command:

Later we'll see what cbindgen essentially does is receive a configuration and a Rust library and then spit out a C header (.h) file. One might think that what cbindgen is doing might not be that special and can be done by hand. In which some cases that might be true if the project is simple enough. Though additionally as the cbindgen documentation states:

While you could do this by hand, it's not a particularly good use of your time. It's also much more likely to be error-prone than machine-generated headers that are based on your actual Rust code. The cbindgen developers have also worked closely with the developers of Rust to ensure that the headers we generate reflect actual guarantees about Rust's type layout and ABI.

As might be obvious already, a project needs to be created, in this case, however, it's a library crate (lib.rs) that we need to include rather than a binary crate (main.rs). Additionally, I will need to configure the project for the hardware I need. To make things easier, I grabbed an existing template for a GPIO project I've created in the past and modified it. I simply deleted main.rs and replaced it with an empty lib.rs as a first step. Finally, cbindgen also requires that we add a cbindgen.toml the configuration file which can be empty for starts. Afterward, the project folder tree looks like this:

This is the part where in lib.rs we need to write the code that we want to be exposed. This is also a part where I spent quite some time. I "simply" wanted to create a togglePin function that receives one of the stm32f4xx-hal types. I was a bit naive in the beginning to think that I can grab any HAL type and plug it in and export it so to speak. Though soon enough the awesome Rust compiler warns that the type is not FFI-safe. I will get to the code and explain soon enough, though, for example, when I tried to pass a Pin type for pin PA5, I got something like this warning:

Before writing the API I specified the attributes and crates needed:

The first two lines are ones we continuously see in a standard Rust embedded template. Additionally, in the last line, I am importing the low-level register types/names for GPIOA that I am going to need in defining the GPIOA RegisterBlock struct that I define next.

Afterward, I define the RegisterBlock struct:

Essentially, all I did here was go into the PAC source code and copy over the RegisterBlock struct code as is and then adjust the namespaces to point to the stm32f4 registers. So the question is why did I need to do this? That is instead of just importing RegisterBlock earlier. It turns out, that when I did that, I noticed that cbindgen later did not declare the RegisterBlock type in the generated header file.

Moving on to the last step here, the API I wanted to create was a togglePin function that can toggle PA5 that controls the onboard LED. This is the resulting code I wrote:

A few things to note:

In this step, we need to ensure that the build generates a static library (with .a extension) as an output. As a result, in cargo.toml the following is added:

Hera one can create a script (which would make sense for more complex projects). To create a script, first, we need to add cbindgen as build dependency in cargo.toml as follows:

Second, we need to modify build.rs to include our build commands as part of the build process. The following code was appended to build.rs:

The above code is pointing the builder to the crate location, configuring it for the C language, specifying the output file name, and instructing it to generate the header. This is largely similar to the approach used with the bindgen Builder. A full list of supported methods for cbindgen::Builder are available here.

The header contains effectively the function prototype for togglePin and the type definition for the RegisterBlock struct.

📝 Note: I encountered strange behavior where if bindings.h was generated already from a previous build, it wouldn't update when running a new build with changes. I had to delete the bindings.h file and run cargo clean to get the updated bindings.h . The point here is that, as a word of caution, it would pay off to check that the header files have been updated after a build.

As an alternative of what was done previously in step 5, we can use the command line by running the following command:

Before we can do anything with the files from the previous step, we need to generate/obtain the STM32 C project containing all the header and implementation files for the particular device used. This is exactly the same process I followed in the first step when in the bindgen post. Then I used the ST-Microelectronics tools (CubeMX in particular) to configure and then generate C STM HAL project files for a particular board/device. Again, for the purpose of this post, since a simple blinky application is going to be created, I kept the basic configuration that exists for the Nucleo-F401RE board I'm using in CubeMX. In generating the code, for the Toolchain/IDE option, I selected Makefile here as well.

As part of the build in step 5, a static library named libtoggle.a was generated and placed in the ./ffi_rust_project/target/thumbv7em-none-eabihf/debug/ folder. Consequently, the generated static library along with the header file needs to be moved into the appropriate locations in the C project. Moreover, the header file needs to be imported into the appropriate code files that need it. In our context, I placed bindings.h in ./ffi_c_project/Core/Src . libtoggle.a , on the other hand, was placed in ./ffi_c_project/build the target directory for the makefile.

In the project main.c we first need to include the bindings.h header so that we have access to the bindings we brought in from Rust:

further down in the code, in the application loop the tooglePin function is used as follows:

Here I am type casting GPIOA_BASE to a pointer of type RegisterBlock. RegisterBlock is the type definition we brought in through our bingings.h from Rust. GPIOA_BASE on the other hand, is a #define in the C project for the base address of the Port A GPIO register in the STM32F4.

Are we done yet? Of course not 😀

Before building the project, we need to take the linker to include the libtoggle.a static library that defines the implementation of the imported function. To do that, I appended the following to the end of the LDFLAGS environment variable:

The full LDFLAGS definition ends up looking something like this:

The project is simply built by running make from the root of the C project, next, I used the st-flash tool/command to flash the code binary to the device as follows:

Exporting Rust API to C can prove to be a more daunting task than it seems. Especially compared to going the other way from C to Rust. This is mainly because of the incompatible types going from Rust to C. As such, a lot of work might need to be done to achieve compatibility. In the context of embedded and in the example I show in this post, I had to dive down to low-level Rust code to achieve my goal. I'm not sure which direction of API integration is going to be more common in the future (C to Rust or Rust to C). Though it's obvious that going from Rust to C, much of the abstractions and probably advantages achieved in the code (safety or otherwise), are prone to be lost. Have any questions/comments? Share your thoughts in the comments below 👇.

Reminder if you found this post useful, and to keep up to date with similar posts, here's the list of channels you can follow/subscribe to:

Garden.io: what is it and why should you be using it? 🪴

Working out vs Programming

CSS Flexbox tutorial: How to use flexbox properties

Python NOT for Beginners ⛔ but for Professionals 😎

Why Using GitHub Pages is a Great Idea

All You Need Know About Object Oriented Programming in Python

What the HAL? The Quest for Finding a Suitable Embedded Rust HAL

What the HAL? The Quest for Finding a Suitable Embedded Rust HAL

How to Create a Testable CLI using TypeScript?

How to scrape different types of data in Golang Using Colly

Structs, Methods, and Receivers in Go